Golden retriever puppies are planned to be ready the week of December 21, 2018. (We are happy to hold pups the week of Christmas, if needed.)

This is a surprise breeding between T-Rex (our “man” of almost 11 years) and Bella (7 years). We didn’t think he quite had it in him, however he has proven us wrong. Bella is to the stage we can definitely feel movement. We are getting the nesting area ready as pups should arrive within the next couple weeks (puppies due 10/25/2018).

Despite the surprise and I am in the process of updating T-Rex’s last OFA eye clearance (his previous was normal), we’ve had great reports on their prior litters together. A pup from their 2015 litter has been running derby and qualifying trials. From the same litter another pup has been into hunt tests. Other pups have been great family companions and hunters. Partridge, grouse, geese, duck and pheasant have been some of things they have enjoyed hunting. Others have gotten into dock diving. We’ve also had a couple go to work as service dogs – one a physical service dog, the other an emotional support animal.

Bella and T-Rex finished up another year of rally-o, obedience and show with our girls in 4-H. They would have qualified for state in ’18 had the girls been able to make all their practices. We had to miss a couple due to other commitments, however, so although their scores (mostly first and second placements) would have allowed a trip to the Minnesota State Fair – we were set back unfortunately due to missing the required practices. Hopefully next year!

We’ve had an incredibly busy summer on top of 4-H and showing general projects in addition to the dog show this year. Our three oldest kids who still live at home are in volley, cross country and cheer. “Pa” works in county government and also crop farms “when he has time”. We’re looking forward to getting our youngest pup, Bison, out hunting this fall. Jenn had gotten a dove about a week ago, but only managed ONE, so Bison was a little bored with that!

T-Rex we were actually worried about for little while this past month. He had a bout of bronchitis and was treated for it and seemed quite well. We even had his advanced cardiac through OFA done during that time (passing, and the cardiologist impressed!). About a week later, he began showing signs of feeling unwell again. Worried the bronchitis had affected him again we brought him in. He was so bad in such a short amount of time that “Pa” had to carry him into the vet. He was placed on IV fluids, blood work was ran and there wasn’t anything abnormal. Thyroid was normal, electrolytes just fine. The only thing that wasn’t right was his cortisol level. It had bottomed out. The is a more definitive test for the condition our vet was leaning toward, however she was about 93% sure it was likely adrenal insufficiency. To remedy that condition, we place him on prednisone to build back up his cortisol levels. After he is at a point where we could try taking him back off, we could go little by little instead of quickly in order to allow time for the adrenal glands to kick back in. This situation was most likely caused by the virus he had with his bronchitis or medication. He was also fully vaccinated just prior to his bronchitis, so that may have weakened his immune system before the bronchitis. (Infections are unfortunately rather common in senior-aged dogs.) T-Rex is back to retrieving fabulously with being back on a dosage of prednisone, however!

Below are some pictures of an adult pup, Suzie, from a prior litter, Roxy & Bella dressing up at the dog show, pups from prior litters, Bella running up the tree and running with her duck dokken. Bottom right is beautiful Glory on a retrieve, daughter to T-Rex and Bella. We can’t wait to announce the upcoming litter! Stay tuned on FlodenFarm.com 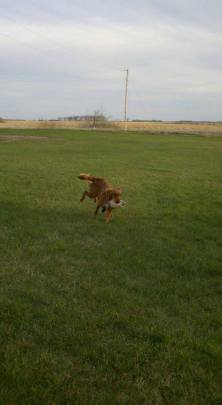